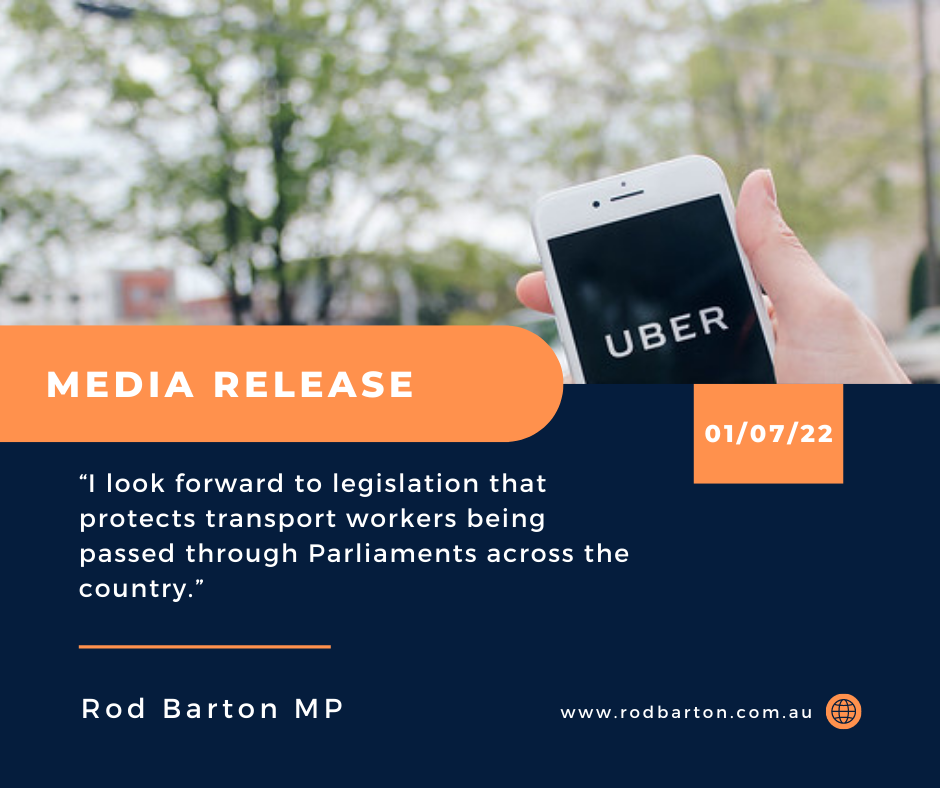 Uber and the Transport Workers Union (TWU) yesterday signed an agreement that establishes an agenda for the future working conditions of gig economy workers.

The Statement of Principles and Future Commitments for Workers in the On-demand Economy, signed by both parties, signals that Uber is sensing a shift. This is no surprise to Rod Barton MP, who has long been advocating for basic workplace rights for gig economy workers.

After years of union advocacy, court cases and front-page scandals, and now a change in Federal Government, Uber have had little choice but to get in front and start shaping the agenda.

The key objective of the agreement is to establish an independent body that will set universal earnings protections and minimum standards for gig economy workers. This is sounding awfully familiar.

In May earlier this year, Barton moved a motion in the Victorian parliament to establish an independent tribunal for transport workers. This tribunal would be an independent panel of industry experts and have the power to set minimum and enforceable standards, enter into enforceable and certified collective agreements, resolve disputes, and review unfair contracts.

Since the onset, Uber has claimed its drivers are not employees, but rather ‘independent contractors.’ This has absolved them from any responsibility to ensure their drivers are paid the minimum wage and receive basic workplace entitlements. This has also led to rideshare drivers being some of the most underpaid and vulnerable workers in the country.

Barton urges governments and regulators to see this agreement for what it is, an attempt by Uber to shape gig economy regulation before it shapes them. Rideshare
companies have spent years profiting off an exploitative worker model, we must ask ourselves, whats changed?

Barton believes both Federal and State Governments must be pro-active, and start legislating basic protections for gig economy workers.

Quotes attributable to Member for Eastern Metropolitan and the Leader of the Transport Matters Party Rod Barton MP:

“Don’t think for one second Uber hasn’t been forced into this.”

“I look forward to legislation that protects transport workers being passed through Parliaments across the country.”

Protections in the Gig Economy